The primary source of income for waterway companies was from tolls levied on boats, the amount of the toll charged was normally determined by the type of cargo and also by its weight. Sleaford Navigation was no different from any other waterway in that respect and so some method of weighing the cargoes was needed. The Company decided to install a weighbridge for cargoes in Navigation Yard, Sleaford, and at the same time build a small hut as an office for the weighing clerk.
However, the decision to install the weighbridge and build the hut coincided with a rise in the prosperity of the Navigation. A very clear indication of this can be seen when comparing the relevant prices of the lease for control of Navigational tolls, warehouse and wharf. The lease of toll rights in 1829 saw a figure of £50 per annum, whereas 7 years later the lease was £1,340 per annum. Consequently, shortly after the initial decision, the Committee resolved to erect a far grander building as befitted their prosperous enterprise. In so doing they were both demonstrating and celebrating the status and success of the Navigation. The building, Navigation House, was finished in 1839 and consisted of an office for the Clerk with the weighing machine in it, a Committee Room for meetings and two upstairs rooms that were to provide accommodation for the Clerk. A small brick extension was later added at the back.
According to Charles Hadfield, the celebrated waterway historian, Navigation House is unique in being the only example of specially built Company Offices to exist on a rural waterway.
After the Sleaford Navigation Company was wound up in 1878, Navigation House continued to be used as a dwelling until the 1950’s when the building gradually fell into disrepair. There was an attempt in the early 1970’s to demolish the building and this led to the formation of the Sleaford Navigation Society whose aim was to preserve the house. It was saved from demolition but no funds were available for restoration.
By 1999 the building was getting into a very poor state indeed but, fortunately, money from a single regeneration bid, Sleaford Pride, was used, together with funding from the Heritage Lottery, to renovate Navigation House so that, in 2005, it was reopened to the public as a visitor and interpretation centre for Sleaford and the Sleaford Navigation.

Navigation House in the 1970's 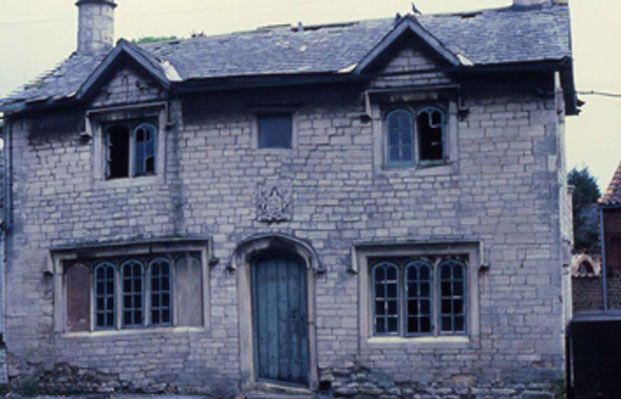