The 1833 proposal, by J Rofe & Son, Civil Engineers of Birmingham and London, was to avoid using the Trent which, according to Rofe was “rendered difficult and uncertain by frequent interruptions to the navigation occasioned by the alternate floods and deficiency of water”. Although the Trent had been improved from Shardlow through to the new lock at Holme Pierrepoint, completed in 1801, the river below Holme Lock to Newark was difficult to navigate. Rofe observed that the river was frequently impassable and that the entrance to the Foss Dyke at Torksey was “difficult and uncertain”. He observed that the Grantham Canal headed east from Nottingham to Grantham and that, from Boston, the Witham and the Sleaford Navigation provided a good line westwards to Grantham with only a distance of thirteen miles between the ends of the respective canals. In his report he noted that “connecting these two lines will effect a short and certain line of communication by which goods may be conveyed in the same bottoms, (without liability to interruption) from all the canals connected with the Grand Trunk to the Port of Boston”.
The precise route of the proposed sixteen mile canal is uncertain but a juxtaposition of Rofe’s plan and a modern OS map gives clues in the contour lines. The route seems to have left the Grantham Canal just to the east of the current A1 road bypass to the town at an elevation of 60m above sea level. Heading south for a short distance it crossed the valley on either a bridge or embankment over the Melton Mowbray road before taking a contour route to the south and then east of Grantham. The line followed the edge of the escarpment to the west of Harrowby until it reached a point just to the north-west of Londonthorpe.
It was here that the scheme, if built, would have started to run into difficulties. In his plans Rofe was at pains to point out that the route would not “injure or annoy the residence of any landed proprietor”. However, to follow the 60m contour, the canal would run through the estate of Lord Brownlow in Belton Park and also that of Syston Hall just to the north of Belton. Rofe’s solution was a 2½ mile tunnel to bypass both estates, a costly compromise!
Exiting the tunnel south west of Willoughby and locking down onto the 50m contour, the canal would have continued south and east of Ancaster to the village of Wilsford. Here the line approximates to the route of the Sleaford to Grantham railway as the elevation drops from the 50m contour to that of 13m where it would have joined the top pound of the Sleaford Navigation.
The position of any locks is also open to conjecture as none were shown on the map. With a difference in level between the summit level of the Grantham Canal and the top pound of the Sleaford Navigation in the order of 47m and, assuming each lock to have a fall of about 2m, there would have been some 24 locks, a heavy number for a canal of only 16 miles. However, with an eye to possible water shortages, Rofe stated that “the lockage will be all one way, therefore only one lock of water will be lost by each boat passing…” so his route had no summit level. He suggested additional water savings could be made “by adopting an improved method of constructing the locks” but sadly did not elaborate on how this would be achieved.
Rofe envisaged many benefits, traffic would increase on both the existing waterways with cargoes of corn, manure and stone from the quarries between Grantham and Sleaford which “only want the means of transport to London, and other markets, to become in general demand…”. He felt that even Lincoln would have benefited from a more reliable increased trade. 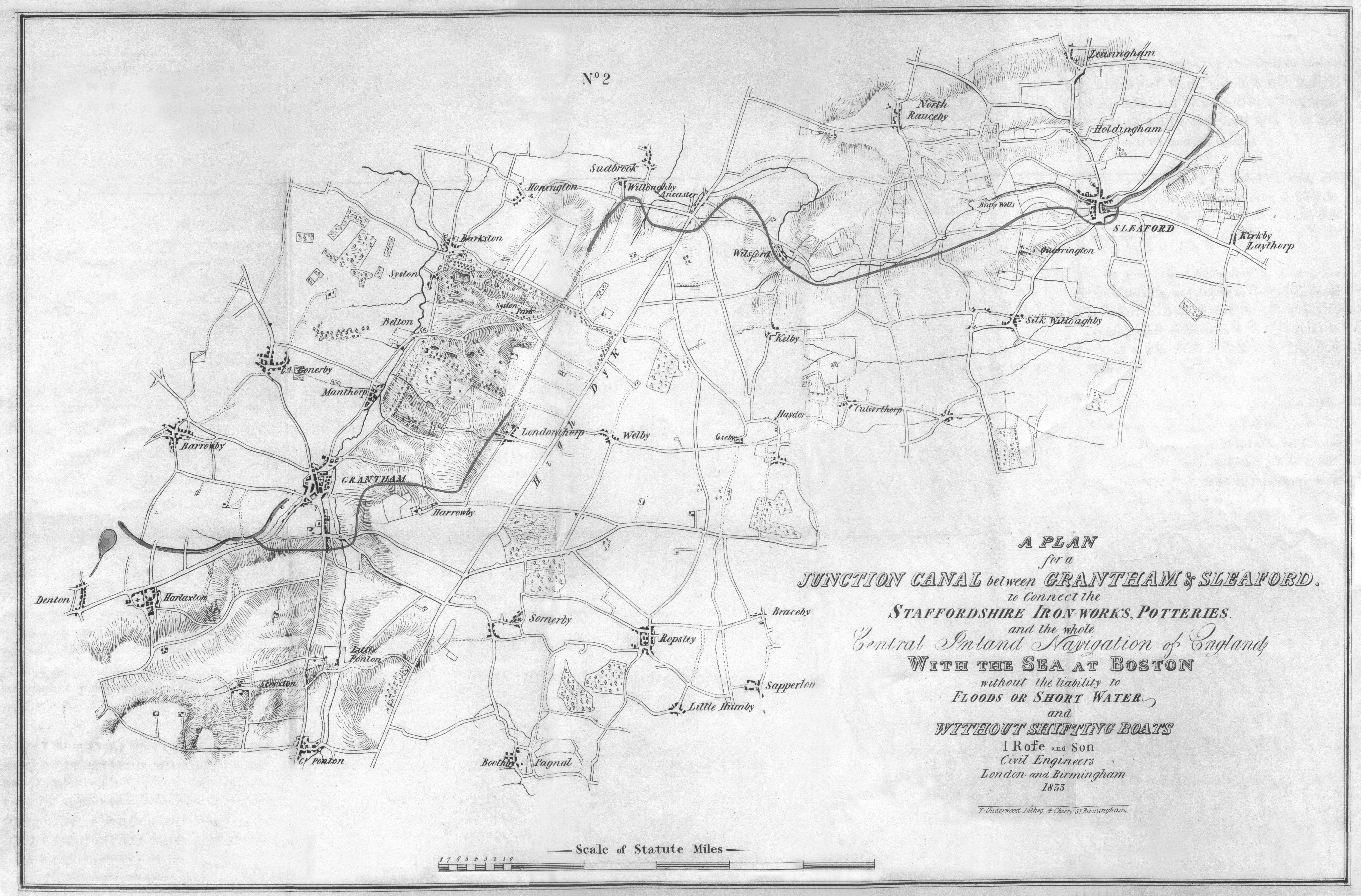